skip to main | skip to sidebar

We had a great first season for the garden in 2010, and have had many fine seasons since then.

Here's what we accomplished the first year and since then: 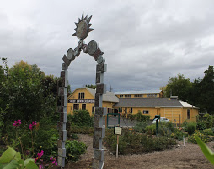